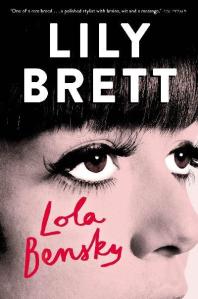 I was going to write only a few of paragraphs on this because I want this wordpress space to be pithy but I simply can’t harness myself with this one.
As Lola Bensky’s father Edek would say: Oy, cholera.

Lola Bensky  is a rock journalist for an Australian publication.  No doubt elements of Lola are shared by Lily Brett, who was also a rock journalist when she was younger. Lola passes through her own life thinking about diets and being fat and how her parents survived the Nazis, yet she also passes through other people’s lives (Mick Jagger, for one) and leaves an impression.

Lola Bensky is not invisible, even though she tells us she feels so. Her invisibility as a child with parents, especially with a mother who couldn’t live in the present, who couldn’t see her daughter through the ghostly bodies of her dead family, is juxtaposed by her visibility when in the presence of the rock deities that she interviews. These celebrities, who the ordinary person would expect to not notice someone like Lola, do see her and are engaged. Even Jim Morrison, who Lola seems to like least, says to her in a moment of insight: ‘You don’t really like me, do you?’ I almost fist-punched the air when she agreed that no, she didn’t. Wonderful stuff.

Lola is not without affect. She has a quiet confidence and she asks lots of questions of the rock-stars she interviews; prosaic, naturally-formed questions, even banal questions, but they are questions that allow the celebrities to show their humanity and their normality. This theme of questions is interesting. Whenever the young Lola asked her mother questions, Renia would respond by dragging two chairs into the kitchen to get some non-essential item down from a high cupboard. The precarious stacking of the chairs and Renia climbing up on top was enough to stop any and all of her daughter’s questions. This brilliantly funny yet desperately sad double-chair balancing act in the kitchen is revealing; here was a woman who couldn’t talk about certain things, who at other times openly grieved for her dead family, all killed in the death camps. Lola knew from a very young age that her mother never recovered from those years and that questions were not welcomed, so it seems she took her questions elsewhere.

We can only wonder at the damage passed on to Lola, though it is mentioned somewhere that the children of Auschwitz survivors are survivors too: of their parents. This simple statement contains so much and is so meaningful that nothing more needs to be said, although Renia at one time says to Lola: ‘Hitler didn’t kill me, so you want to finish me off!’ Brett doesn’t tell us any detail about Renia’s death other than that Lola missed her terribly after she died. Brett lists the rock-star fatalities summarily and we are left to put the rest together. I liked this because really, nothing else could be said. It’s almost as if Renia was already dead, already absent, so her actual leaving was not noteworthy and didn’t need to be actualised.

I finished Lola Bensky this morning. I read someone who said they were left wanting more. I agree: that last sentence is almost a crime and I couldn’t believe it when I turned the page and there was nothing more. NOTHING! Oh, Lily, I know you could have kept writing BUT I do admire the restraint and I don’t hold this against you. It means that the reader can continue to fantasise along their own lines of wondering. The reader can see that the meeting of the lines Brett drew in the narrative up to that point, like non-parallel paths that absolutely have to connect, was inevitable, even if it was going to happen out of the reader’s view after the book finished. ‘I remember you. You told me about the cabbages in Lodz!’ is what I imagine.

Again, somewhere else, a different reader suggested memoir would have been the better vehicle. I’m not sure about this, though I would have read a memoir of hers with equal rapaciousness. I admire that Brett chose fiction rather than memoir to bring this story to the world. Memoir might have been predictable and expected and readers would be more critical about things left out and overly concerned with truth and accuracy. But the way it is, as a novel, we accept what is written because it is fiction, and while we still play the guessing game, we don’t need to know whether the words related in quotation marks were actually uttered in history. I understand what Brett means (read in an interview somewhere) when she says that she wanted to bring the essence, the truth of the famous music people written about. So it is that I am now left with a sense of knowing something about Mick Jagger and Cher and Jimi Hendrix and Janis Joplin and Jim Morrison that I don’t think I would have felt if it were non-fiction. Is this the mechanism whereby fiction sometimes is truer than non-fiction? Perhaps it is.

Ultimately this is a funny book and a moving book. It’s very funny, despite the close positioning of the laffs (not least the speech patterns of her parents, especially Lola’s father idiosyncratic syntax) with the horrific details of human suffering in the Nazi death camps. If this makes us uncomfortable, well good; I imagine that we should always feel disturbed by narratives of Jewish suffering in the Holocaust, and that it should be kept close so that we can be reminded.

I think Lily Brett does something clever in Lola Bensky; something clever with family, fiction, history, death,  tragedy and fame. She makes us think about truth and about how celebrities are really just people like everyone else. That parents aren’t perfect, and that pain can be inherited and passed on, that family damage can be enormous and yet, can be survived. I hadn’t read Lily Brett for years and reading this book has made me hungry to revisit the other books of hers that I have on my shelf.