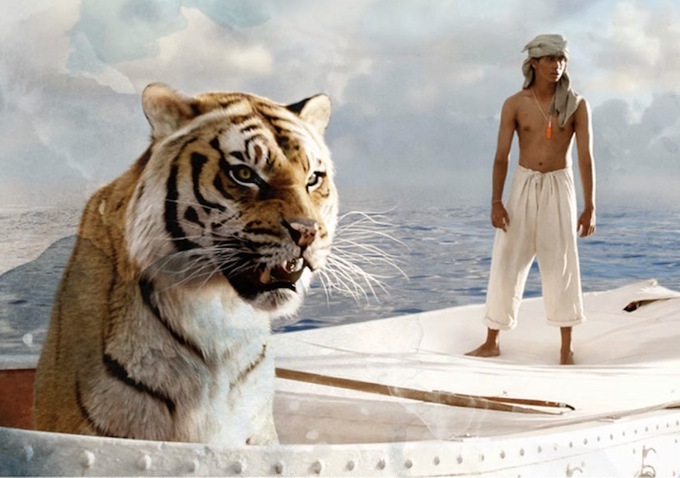 Quite an extraordinary movie even if only for the visuals (especially the realism of the tiger; how he swam accurately, how his facial expressions shifted, how his eye colour changed as he became deteriorated — his coat thinning, nose drying out and becoming pink and his form becoming emaciated). It made me want to re-read the book, to remind myself of the themes, especially the idea of a kind of reverse-anthropomorphism. To remind myself what I think really happened.

I found the interspersed scenes with the ‘writer’ (was this meant to be Yann Martel?) and the adult Pi sometimes distracting and a little tedious. I know there was important narrative there but I do wonder whether it could have been handled differently, or minimised. I think it was something to do with the writer character’s face, his expressions, his look. He seemed shallow and I didn’t want him to be the one in receipt of this amazing story. I know his acting was quite deft and subtle but there was something just a little off about him. Could he have been more humorous yet still sincere? At one stage there was a look, or two, that made me think: really*, are they gay? Not that there would have been any problem about this other than that it didn’t turn out that way, so for me, it took me out of the movie. I wonder if I was the only person who had that reaction. I suspect not.

The scenes on the boat with Pi and Richard Parker were magical; scenes full of tension and conflict, the ocean around them filled with threat and beauty, the sky above them also bringing sunsets and gorgeous clouds that could calm and pacify, as well as storms that could crush and destroy.

But there was something unsatisfying about it in the end and I’m not sure what it was. Don’t think it didn’t make me cry, because it did. The bit where the adult Pi said that he’d expected Richard Parker to look back in farewell.

* I have to remember I’m not swearing on this site. Had fark here previously. This is my nice, clean, shiny space.