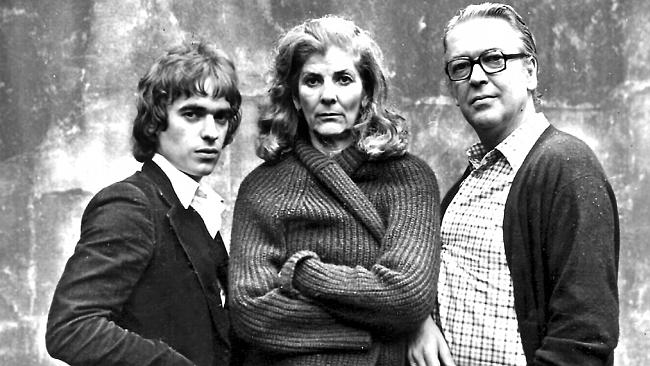 On the Saturday night I went to the Perth Concert Hall to see Martin Amis talk to Tony Jones. I walked there from my accommodations, sculled a champagne and then counted the number of Amis titles for sale at the desk. TWENTY. I went in, found my seat and was pretty happy to be 8 rows from the front.

The ‘chat’ began with an intro, Jones giving a precis of all things Amis. There was mention of his early reading tastes inclining towards Harold Robbins and ‘the dirty bits of Lady Chatterley’s’ – and ” ‘what’s wrong with that?’ you might ask” said Jones and the audience tittered.

You can see the entire video here OR read my insubstantial notes OR both. It’s up to you. Interestingly, just now on twitter, a tweet from Kathryn Heyman directed me to an article in which Amis talks about women liking to be ravished, and the subsequent outcry that he is glorifying sexual violence by saying something like this. I leave it to you to work out what you think about that: Daily Mail article.

– Saul Bellow: one of the great heroes

– Amis had never names a novel after a character before this (I think referring to his latest novel Lionel Asbo. It was dark in there, I couldn’t keep good track. I’d sculled a champers remember.) He said England is rather touchy about this novel — “unsurprisingly” — and he finished the book just as he and his wife were planning to leave England (the implication being that he didn’t leave the country because the country got pissed off.) Amis, in fact, said he thinks it’s a ‘very affectionate’ novel about English but it is a realistic depiction of the decline of the Empire (He didn’t say empire; I’m just putting that in now.)

– Nabokov’s short stories: ‘he’s just in a daze of love of life’ (Additional note to self here, to look up Amis’s essay on Nabokov, here is one essay, whether it’s the one; and here is Amis’s essay on Lolita.

It’s only in the second half of the twentieth century that the trend has occurred to advertise your alienation, but it takes you nowhere in art

It’s a wonderful thing to go to your study and do something that makes you a living – you might die down there though.

– Amis observes that it’s all over for a writer when the biblical span is over, the three score years and ten. ‘They’ve lost the magic.’ He opens books of favourite authors, with anticipation, but ‘they just don’t have it.’

– on writing, ‘you shouldn’t know what you’re up to until the end.’ Tom Stoppard called it ‘bad art’ when the artist knows exactly what they’re up to. Amis says ‘it should be like a quest.’

– there was lots of talk about Lionel Asbo, mention of a character called Desmond sleeping with his grandmother, but ‘the good thing about it is that there’s not much of an age difference. Desmond’s mother had him at twelve, and his grandmother had his mother at twelve too.’ I wrote all this down. ‘He goes on to be the most decent character I’ve ever created.’ Lionel or Desmond? I haven’t written it down, but I think it was Desmond because later Amis says ‘Lionel had to be counterbalanced by a character who was good, because Lionel is a monster.’

– Lionel Asbo is a ‘cartoonish, in a way’ novel

– Amis asked his father, when he moved in with him and his stepmother Jane Howard: ‘Dad, are we nouveau-riche?’ Kingsley said: ‘We’re very nouveau, and not at all rich.’

I was averaging an O-level a year

– Amis has read Pride and Prejudice three or four times and still gets ‘very anxious’ about whether [Elizabeth and Darcy] will ‘get together.’ ‘We have a passion for a happy ending. Austen’s narrative power lies in couples who are made for each other

– Kingsley was a ‘grinder; no matter how shitty or hungover’ he was, he’d go off to his study to put in the hours. Martin’s bedroom was above his father’s study and he’d sometimes hear his father laughing as he worked. Jane Howard would be busy in the house, in the garden, then run to her study and with a clatter of typing, produce in an hour what the senior Amis did in a day

– Tony Jones asked a question about women’s writing, and Amis said: there’s ‘less tranquility in women’s writing, less of a gap, a bit closer in to emotion, less processed’ than men’s.’ Not sure what I make of that.

– Amis said of The Rachel Papers, the novel wasn’t a ‘raging success’ and that like [his father’s debut] Lucky Jim, it was a ‘sleeper.’ ( I was finishing reading The Rachel Papers for the first time while in Perth. I loved it, and even though it’s more than 20 years since I read Roth’s Portnoy’s Complaint, and loved that, I think I might have preferred Rachel . Must re-read Portnoy’s to compare.)

– Amis said it’s very common to have a father/son pair in music and painting, but not writing, for them to ‘have more or less an equal body of work.’ Was I the only one to sense a lot of competition here?

– as time went on, having a writer father ‘delegitimised’ Amis the younger, ‘where in the beginning it had helped.’

– Martin Amis [in the context of being the son of Kingsley]

– Amis has never been offered any MBE or other British titley things, ‘which any bureaucrat gets offered. My friends or peers are accepting or turning down knighthoods… [maybe it’s because] I’ve said the royal family is a wank.’

– On his dear friendship with Christopher Hitchens, Hitchens’s widow Carol said: ‘You’ve inherited his love of life, because he did [love life]. So it’s up to you to do it on his behalf.’

The ONLY good TJ question that I could see was when he said that he’d asked Hitchens why he’d never written a novel, and Hitchens said he had friends who did that: Rushdie, Amis and Ian McEwan. (Actually, that wasn’t a question TJ had for Amis, it was a recounting of a question. Er.)

– His next book is already written is called The Zone of Interest and it’s about the Jewish holocaust.

Amis said ‘our relationship was like an unconsummated gay marriage’ because he got a chapter in Hitchen’s book (Hitch-22) whereas wife Carol didn’t. Tony Jones said something like ‘you get the sense things might have been consummated from his end’ and Amis said ‘if he’d had his way.’

Highlight in the video. Even if you don’t watch the whole thing, go to the 1:03 minute point or thereabouts to see how funny Amis is, to hear about a time he was having dinner with Christopher Hithchens, hear about their relationship detailed above, and hear about Kingsley Amis’s ability for mimicry and imitation. Funny.