Here are some of the things that caught my eye this week, or came under my nose.

Article from The Atlantic on Vera Nabokov and her role in her husband’s work. Often people talk about ‘wanting a wife’ or ‘needing a wife’ — I’ve said it myself — as if the only helpful function of a woman for a creative or otherwise busy type, is to be a wife and therefore in the support role. The Legend of Vera Nabokov.

An article from The New York Times on the ‘dangerous game for a writer’ of reading while they are writing. The idea is that you will write what you read, and therefore either step towards plagiarism or some sort of taint. I’ve had people suggest, one of them MJ Hyland no less, that opening onself to influence is a good thing while learning to write better. One of the exercises Hyland suggests is to do an imitative exercise. Take the first page or two of a couple of your favourite writers, and transcribe them by hand, taking note of what they do. Then take the first page or two of your content and write it in precisely the same style as the authors you admire. Using the same number of verbs, the same rhythm/syllables. It’s not plagiarism but ‘use the template.’ (Here are my notes on the workshop I did with her.)

How the internet is making it harder to read books. Thanks internet.

THIS: Fremantle Press release on Sarah Drummond’s wonderful SALT STORY being listed for the Dobbie Award. I’ve also read Jill Stark’s High Sobriety and it’s a good book, a really important book and accessible, which is crucial. But. But, I want Sarah to win of course. Sarah writes so beautifully and believe me, she has many many more stories to tell. Her author blog is here: Sarah Drummond New news is that it’s being made into an audio book, and we think it should be William McInnes in the booth, especially as he bought a copy of Sarah’s book at the Albany writers’ festival AND she had a photo taken with him and charmed him. I don’t have the ‘good’ pic to share.

In GIRLS, the last episode of the most recent season, Hannah Horvath had received her letter of acceptance to the Iowa Writers’ Workshop. The final shot was her clutching the letter. It was a brilliant moment. I had to explain to my daughter, watching with me on the couch, that the Iowa Workshop is the best writers’ workshop in the country (a moment later on-screen it was described as the best in the world, OH ALRIGHT, I said. IN THE WORLD.) This is an article written by a student about a day in the life of, and then there’s this article, talking about how when the director of the workshop saw that scene, she thought to pick up the phone and talk to Hannah, because she calls all prospective students. Then remembered she was watching a show. Read it here. 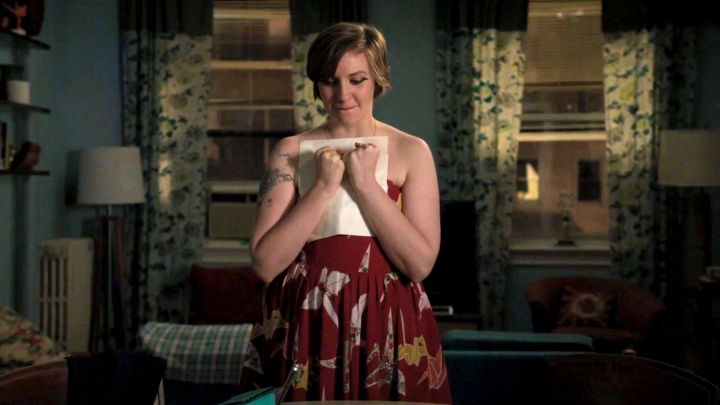 Conversation on twitter about the renaming of the Orange Womens Prize for Fiction to the Baileys Prize. I know the Orange part of it referred to the telcom, and while the Baileys IS the sticky sweet milky drink, it could be worse, we decided. While there was some commentary around the idea of women being associated with that type of ‘sweet girly’ drink, several of us agreed that the Laphroiag Prize or the Hendricks sounded good. Most of us agreed that it could definitely be worse, with thoughts of the Tampax Prize or Naprogesic Prize (Annabel Smith’ suggestions) or The Berlei, The Cutex, The Clairol. But a late entry from Annabel has just won and it’s decided now: The Canesten Prize for Womens Fiction.

From Leunig this week there was this

Article on the ‘Golden Age’ of second novels. Bit hard to believe considering all I’m hearing around the traps is if you are lucky enough to get a first novel up, the second one is even harder, because if that first one didn’t knock everyone’s socks off, well, then you are standing there, everyone has their socks still on, and it’s awkward. Also, on this topic, at the beginning of the week I was at the launch for the Sleepers Almanac, and ran into an ex-writing teacher. She has two novels published and a poetry collection. She is working on her next one after a bit of a hiatus (last novel and poetry book both pubbed in 2009.) She said, and I quote: ‘Things are the hardest they’ve ever been… I am not looking forward to marketing my next book.’ I was interested she used the word ‘marketing’ not ‘selling’ or ‘trying to sell.’ She already, obviously, has a relationship with publisher(s) and doesn’t have/need an agent (I don’t think, maybe she does.) But the fact that she was talking about herself marketing the book. Made me feel sick, only in that this is a person with a track record, she is fairly established, and she is worried about it all.

My reading this week: I am in the middle of an extraordinary book that Evie Wyld mentioned at the PWF, Happy Like Murderers: The True Story of Fred and Rosemary West by Gordon Burn. It’s not extraordinary because of the subject matter, it’s the voice which is very conversational and as if you are sitting for a cup of tea with a neighbour, who is filling you in on everything that’s happened. It’s quite chilling and very readable. I’ve also started Fiona McFarlane’s The Night Guest, as well as being part-way through Larry Brooks’s Story Engineering.

Let’s finish on a good one. This is Hillary Clinton, dodging a shoe while speaking on stage, then managing to come out with not one, not two, not even three but I think it’s four quips. She is ace.

3 thoughts on “Friday wrap, with lettuce”