I’m serious. I was in two minds about blogging about the Mildura Writers Festival. (Some print material had the apostrophe, some didn’t. I’m making a call and going without. Just because then I don’t have to slow down to put it in.)

Imagine I’m whispering all of the following to you. We’re in a cafe, I’m having a long black, I don’t know what you’re having, but that’s not the point. I’m grabbing your arm and telling you about my weekend. Because you don’t know me that well, you’re a little alarmed. Because I’m urgent and pushy and also I’m holding onto your arm.

So, the Mildura Writers Festival is possibly the best-kept secret in Victoria. It can attract the big names, it’s miles from Melbourne, the weather is Mediterranean, there are amazing restaurants, and there are paddle boats. Sessions are intimate, so intimate that Helen Garner will ask a question from the audience, as will Stefano de Pieri. Or in another session, Alex Miller and Helen G will be sitting up the back. You walk into the bathroom and Helen is walking out, you walk into the venue and she’s walking out, waving her arms and saying (to no one) ‘thank God, it’s cooler out here!’ You might pick up a prize-winning poet’s husband and give him a lift to the other side of a TAFE campus. Just for example.

My friend and I drove up on Friday. We stopped in Bendigo for lunch and then kind of went on the wrong road out to the north, rather than angling to the north-west. This meant my GPS Tim had to lead us through the back-blocks, so we could head in the right direction towards Mildura. We raced through farmland as the sun sank lower in the sky; all the yellow canola, all the silos. The sheep and cows. Gorgeous stuff.

When I looked at the program, I thought because we couldn’t be there for the Friday, there was really only the Miller-Garner thing on the Saturday that appealed to me. Because ‘I don’t like poetry.’ How wrong I was. 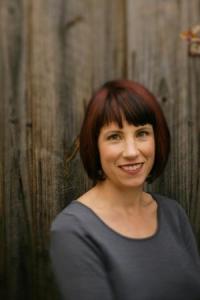 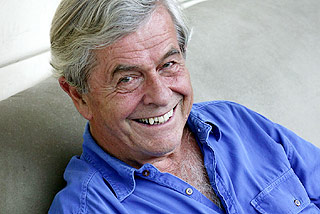 Chris is a warm, smiley man. I know he is a poet of great repute himself, and as he introduced Lisa (an ex-student) it was clear how much esteem he holds for her . As my friend and I struggled to find the venue, we’d managed to get to the wrong side of the campus, just as someone else climbed out of a taxi. We offered him a lift around to the other side (we were all running late, the session was starting, it was a bit stressful but somehow jolly) and as we each asked the other what we were doing there. We awkwardly said we were writers (my friend said: We’re wannabes, and I said: Don’t say that, we’re *writers* blushing furiously) he said ‘oh, I’m married to one of the writers. Lisa Gorton.’)

Chris’s intro mentioned Lisa as a ‘very distinguished, modest member’ of the seminars he held. From that class, two poets went on to ‘laughingly have a career in poetry’ and Chris said ‘I say “laughingly” – people who know about the publishing world will know what I mean by that.’

Lisa was a Rhodes Scholar (later she said ‘I feel completely differently about the Rhodes Scholarship, now that Abbott…’, and she didn’t even have to finish that sentence; everyone laughed, she’s funny! I thought); she wrote her PhD on the poetry of John Donne, and has two publications, Press Release and the latest, Hotel Hyperion. (Chris described the covers which I thought was good, it meant for people who were unfamiliar we had a visual image of what to look for at the book stall; after the session I went to the stall after getting something from the car and both of Lisa’s had sold out. I’m particularly interested in her first collection as it has its roots (sorry) in the Mallee region, and I’m interested in all things Mallee as my first book is set there).

Lisa’s work is, according to Wallace-Crabbe, “‘various, lyrical, cubist’ dare I say” (I think he said ‘cubist’.)

The night before, Lisa had been presented with the Philip Hodges Prize (apologies if spelled wrong, I can’t find any reference to it on google). Lisa is published by Giramondo, and she mentioned publisher Ivor Indyk by name and I have to say, any time I hear Indyk’s name, it’s somehow connected with overt risk-taking in publishing, or success. He is prepared to publish things that are different. Not that Lisa said any of this, it’s my impression.

Lisa said she decided to be a poet when she was six. She had an illness which meant she was in bed for three months, but instead of resenting the stillness and lack of activity, she lay in bed and looked at the light through the window, the patterns on the ceiling, sat in the window nook. She spoke about the time as seeding this desire for writing in her. She was ‘writing always’ but ‘scraps’ – she had a misapprehension about the drafting process and never got anything ‘done’ she said.

Her grandmother was from Maine, but had an orange orchard in Kerang, and Lisa’s early poems were about the Mallee.

CWC: mentioned there’s a prevalence of glass in her poetry, and themes of reflection and containment. He commented that it was interesting that she ‘began’ at the window of her grandmother’s house (presumably this was where she spent her illness.)

Lisa mentioned something called a ‘storm glass’ – an object she saw in the window of a shop in Melbourne, a device to ‘unpredictably’ predict weather. It has a glass dome, and her has a ‘kitsch’ outer casing, and crystals that form within. For something that I’ve never heard of before, and which is entirely fascinating, there are a lot of images on google: 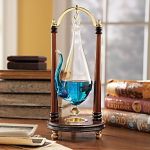 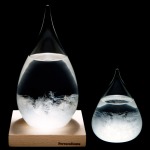 I love the idea of Lisa being inspired by an object in a window. She said she used a commission she received from The Age to purchase her storm glass.

Lisa read from Hotel Hyperion, the piece she read was the one ‘the whole book really grew out of this poem.’ She talked about metaphors, saying ‘so many metaphors began in the Renaissance, eg Shakespeare.’ (In the whole session she read perhaps four or five poems. Later I made a note about her: ‘like a frail brunette sparrow. But smart.’

Lisa was asked by someone in the audience about drawing inspiration from the work of others and she said that she read others’ work when she wants to ‘restore the sense of what I want to do in my work.’

Chris said he was dreaming of Yeats when he woke up that morning.

Then they talked about the latest book, I’m guessing Hotel Hyperion. Chris said ‘it’s a fascinating direction to take in your poetry’ (science fiction). Lisa said she’s working on a novel, moving to completion. Has been working on it for years. ‘You can tell already my novel will not be a best-seller.’ [audience laughs. Oh, we get it!]

Lisa said that she had a time where she was riding on a bike in Ireland. She would ride 80ks a day, talk to no one, watch the scenery passing and go into an ‘altered state’ – meditative, which was similar to when she’d been sick when she was little, that sense of thinking, dreaming, creating.

Another question from the audience, this time it’s Helen Garner: I copied other writers consciously when I was younger… sometimes now I write out by hand a quotation or sentence by someone else… did you do that when you were starting out?

Lisa Gorton: influence is often taken as a wholesale thing, but often it’s ‘chancier and stranger’ than that. (She used the word ‘chancier’ a couple of times. I like it.) As a writer, you are dealing with other material all the time, it can provide an angle into your own work. ‘I feel sad that I didn’t grow up learning poetry off by heart.’

Question: What poems will you choose for your children to be exposed to?

LG: They love rhymes, word games. The reading of poetry is not that dissimilar to writing it. (I didn’t write down any titles, Lisa didn’t mention any specifically, just that her kids were attracted already to schoolyard rhymes, for example ‘one potato, two potato’ for working out who’s ‘It’ in chasey etc).

She was asked about her novel and Lisa said it is a ‘meditation about a property, mothers, daughters, disputes over a property’ and I was sitting in the audience thinking ‘fuck, if it’s about a freaking property in the MALLEE which of course it WILL BE because she spent time at her grandmother’s ORANGE GROVE when she was a CHILD, and it’s got MOTHERS and DAUGHTERS and SO HAS MINE and… [melt down]’

Someone spoke of a sonnet of Auden, I think it was Chris, about the difference between poets and novelists, and Lisa said novelists/prose is more ‘inward’ you go into it, but most of the narrative in poetry is ‘in the gaps’ and that it was ‘an easier way to write’ she said, laughing.

Chris said John Masefield coined a phrase ODTAO – one damn thing after another (can’t remember the context for him mentioning that, but I thought it was cute, hell I was writing everything down.) And because Lisa had saidthat she was perhaps ‘annoyingly awkward’ earlier, said that ‘as poets our task is perhaps to harness and employ the higher awkwardness’.

Lisa was asked again about her novel, and whether it’s sci-fi. Lisa said it isn’t; that it’s a ‘weird inward realism’. That she likes sci-fi but it’s not so ‘intimate’. She talked about her two boxes of ‘scraps’ (her notes she’d taken for years, ‘oddities’); that she went through them, kept some ‘and they became poems’ and threw the rest out. That it felt fantastic. Chris said that throwing out is great for writers, I’m sure he said ‘like vitamins’.

Question from the audience, about how having small children has affected her work, on what she writes and how. Lisa said she was tired for years and it made it easier to enter into that dream state that is a big part of her work. I was prepared for her to talk about the  negative aspects of having children around, how they intrude on your space, but she was really positive, to the point of wondering how she will access that dreaminess when they are bigger. That there are freedoms and adventures built into the day with young children, the day has to be structured differently and so there are moments you are with them, and then stolen moments of freedom where you might be able to do some work.

Another question from the audience, or really it was a comment, and again from Helen G: she wanted to reassure Lisa that grandchildren will help. ‘As a grandmother I found the company of small children is a gift. I just wanted to let you know it comes around again.’ Which was lovely. It was wonderful to hear these women talking about their work and how it dovetails – or not even that – benefits from being around small children. To me, I struggle with that idea I have to say. I didn’t do any writing while my daughter was small.

Next up: Alex Miller and Helen Garner session.

8 thoughts on “Ssssh, don’t tell anyone. Let’s keep it secret.”