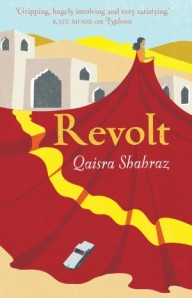 My friend Athi and I went along to see my twitter friend Qaisra earlier this month, to hear her speak about her work. Qaisra has been very warm and friendly on twitter, and when I read last year that she was Australia-bound for the Byron Bay Writers Festival, I thought I might make the trip up. Well, that didn’t happen but I was really happy when she said she would be coming to Melbourne.

Qaisra doesn’t know this, but I have an affinity for people from the Muslim world and a fascination with the lives lived there. My book shelves contain titles like: The Private World of Ottoman Women; Anatolia Knitting Designs; The Muslim Discovery of Europe; Children of Allah – Between the Sea and Sahara; A Third Treasury of Kahlil Gibran; Nine Parts of Desire (by our ‘own’ Geraldine Brooks); Muhammad for Beginners; The Perfumed Garden (unexpurgated!); Women in Islam; Said’s Orientalism; A Reader on Classical Islam and Lady Mary Wortley Montagu’s Turkish Embassy Letters. And that’s just a few of the literary ‘learned’ stuff. I also have heaps of titles in the ‘Not Without My Daughter’ vein, some more prurient and sensationalised than others: Behind the Veil; Daughters of Arabia; Unveiled; Princess – The True Story of Life Behind the Veil in Saudi Arabia; Daughter of Persia; Mirage and Price of Honour.

Let me explain. I married a Turkish man and we were together for ten years. We had a child and I have spent a lot of time in Turkey over the years, where my ex-husband is from. So, naturally, I had an interest in reading about this new world I stepped into when I married a man after four months of knowing him, keeping it secret from my family back home. (It went like this: go backpacking at the age of 26; meet a beautiful Turkish boy four days out of Melbourne; have a romance; let it go a bit further than normal; get married; then work out how to tell everyone; meet sister in Paris and don’t tell her; come back to Australia; still keep it a secret until father guesses what you’ve done and confronts you with it over dinner in a Chinese restaurant.)

When my daughter was a baby, I became friends with an Australian woman who was also living in Istanbul. She was married to a Turk, and she had converted to Islam which I found fascinating, especially as I was then (and still am now) a determined atheist. I remember her lending me her copy of the Koran in English, so I could look at it, and it’s only now that I realise how generous and trusting that was. At the time I didn’t. She was never pushy and never heavy about it, she knew I was sincerely, if academically, interested and she answered my questions happily without ever, it seemed, expecting me to convert or move in any particular direction. My ex-husband was non-religious, and I had a lot of freedom in that marriage, as much as I have in my current marriage, to a non-religious Catholic with Italian background. What is it with me and non-Anglo men? Why do I feel the need to state that I had freedom? I guess I feel a little defensive of Muslim people in general as other people mostly don’t understand Islam and ignorance is really colouring attitudes at the moment around the world.

I was really pleased when I found my own copy of the Koran, in a funny little shop near the Blue Mosque in Sultanahmet, Istanbul. It was up high on a dusty shelf, in English, translated by A. Yusuf Ali and the frontice-piece states the first edition was published in 1934. The preface is astounding. Written by Ali in Lahore, Pakistan, in April 1934, it tells of the ‘history’ of his ‘project’ and is so interesting. When I first read it properly, I googled Yusuf Ali and found out more about his life. More on that perhaps another time.

Another point of similarity is the cross-cultural thing. My Master thesis was written on the intersections of language, culture and identity in bi-cultural Turkish-Australian children, and so I am drawn to this area of learning and reading and writing as well.

What a long-winded way of explaining my interest in Qaisra and her writing.

As it was a PEN event, an empty chair was placed and named for journalist Peter Greste who is being held in Egypt. The facilitator told us about Qaisra’s books, and a bit about her life and teaching. She said that her first novel The Holy Woman (2001) is a bestseller in Indonesia and Turkey; that her latest novel Revolt (2013) is set in contemporary London and also features a fictional Pakistani village (with a ‘wonderful cast of characters living in the village.’)

Once Qaisra began speaking, it was clear this is a woman who is smart and engaging and very very warm. She is a teacher and this shows; she wants to share her work in the way that a teacher does, explain things so we can understand. She was full of praise for Australia in general, and Melbourne in particular, saying ‘Do you take it for granted?’ and most of us immediately shook our heads. I think any aware person knows how lucky we are to live in this country.

Qaisra has been writing since she was fourteen, but became a ‘proper’ writer at nineteen, when she had an article published in a magazine. At twenty-seven, she had a story (her first) picked up by a German publisher, to be used in a school text alongside some familiar names: Virginia Woolf, Doris Lessing. ‘Not because it was fantastic,’ said Qaisra, ‘but because of the cross-cultural content.’ She was, she says, very lucky.

We heard about the novels in turn, and there was a reading from each. Qaisra contextualised each book – Typhoon for example is a sequel and a prequel, to The Holy Woman in that there are common characters across both books. (When I asked Qaisra which of the three books I should buy, I said ‘which one do you like best?’ She was unable to answer, but later, when talking, said she is proudest of the crafting of Typhoon, proudest of the writing.) The Holy Woman covers five years and five countries; Revolt covers two days in one village.

Revolt took nine years to write. ‘It was a nightmare’ but she is very happy with the product. Qaisra advises aspiring writers to never start a long book, it’s ‘so time consuming’ and that it was her most ambitious project as it covers the life of the whole village, three sisters, and six other households.

I didn’t take too many more notes. I was happy to just listen and enjoy. But there were some questions from the audience, and my question was: Which writers do you love?

It was a lovely evening, and I always really enjoying meeting writers, especially ones who have been so kind on social media.

Finally, the last thing Qaisra doesn’t know. I’m spending a week in England early next year so I’m hoping she might be able to tell me about any writing workshops that might be on. Or at least point me in the direction of a good coffee shop.