Thuy On with novelist Mark Henshaw

I first met Thuy when The Big Issue published my story ‘Dead Man’s Cake’ last year. I perched awkwardly at the team’s table in the Optic bar after the launch. To be fair, they called me over, and I was introduced to everyone else. Thuy said she really liked my story, that it was a standout from the start.

I next ran into Thuy at a drinks, and then again at the festival when she asked if I was going to any of the morning read sessions she hosts. The Morning Read has a 10am start time and as I was booked to go to sessions later in the days that I was in there, inside I was saying: I’m not sure. It’s early, and outside I was saying: Sure, see you there!

I didn’t go to any of these sessions last year (see 10am start) but what a doltish move that was. They feature a range of writers, reading from their books, and the one I picked was one of the Friday ones, ft: Chris Flynn (to read from The Glass Kingdom); Angela Meyer (Captives); Lauren Beukes (Broken Monsters) and Mark Henshaw (The Snow Kimono). It was a fab bunch.

Lauren read first from her book described as a ‘hybrid thriller’ set in Detroit.

Angela read from Captives, her collection of flash fiction which is esoteric and intriguing.

Mark from his second novel (his first was published 26 years ago. I love it. he’s been getting a lot of press recently, so I’ll probably buy and read this book. It’s interesting that he’s never been to Japan, yet parts of this book are set there.)

And Chris read last, and this reading included a rap ‘this is meant to be bad’ he said, from a young guy called Mikey, from Freo.

He’s a guy who wants to be a rapper and a gangster, but he’s really bad. And he has all these terrible ideas for reality tv shows. 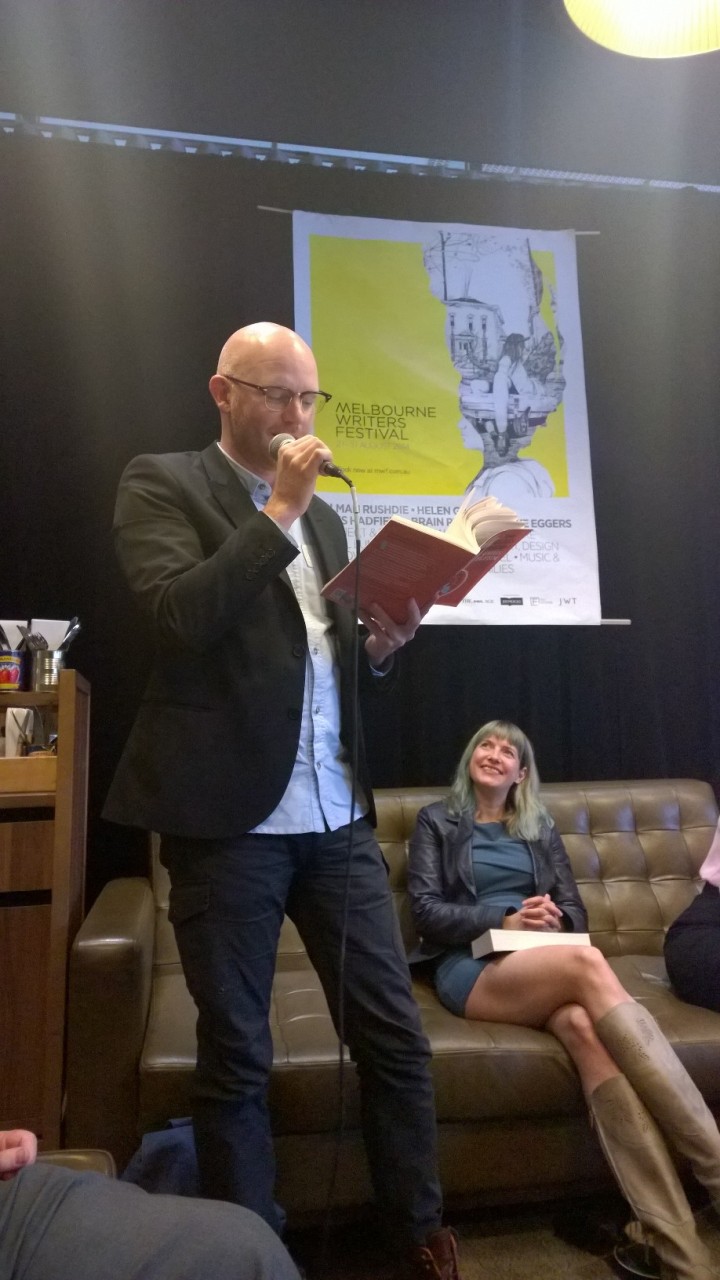 The ticket to see Philip Hensher talking to Michael Cathcart was a bit of a lucky dip. I knew very little about Hensher or his work (something something gay activists something something bookshop something funny.) To listen to him and learn more about him was a delightful surprise. I bought the book straight after but couldn’t wait to get it signed. If publishers or festival directors wonder whether appearances translate to sales, they do in my case. If I see someone interesting, who I think will have an interesting book, even if it’s something I wouldn’t ordinarily read, then I will often buy the book. At this MWF, me seeing someone speak translated directly into 6 books I’d not intended to buy (Rushdie’s Satanic Verses; Hensher’s The Emperor Waltz, Gaita’s Romulus, My Father and an essay collection; Wolitzer’s The Interestings (it had been on my list for a long time) and Chris Flynn’s The Glass Kingdom. During visits to the bookshop, I bought 2 more that I’d intended to get while there as well. So it does translate.

Philip Hensher was a dapper man, and I guessed him younger than he is (born 1965). He had a hat (trilby? I don’t know my hats) on the table and was bearded and cuddly. My. type. of. man. He’s a critic and reviewer as well as writer, and has been a Booker judge (there were 130 book in his year). The more he spoke about his book, the more intrigued I became. It is in three parts (I’ve not even opened it; it’s waiting for me like saved chocolate biscuit, or maturing bottle of wine. Actually it’s not in three parts, but they spoke about three parts; see below.) One part is about a young gay guy from Sheffield (like Hensher, we were told) who goes to London to work in a bookshop, the gay activist bookshop. The bookshop people arrive to open up for work and Arthur is asleep on the doormat, and they gather him in to their world. Philip read from the book and it was a scene where police raid the shop.

HILARIOUS. It was this scene that made me 100% sure I was going to buy the book.

He’s looking for a bookshop. He loves books more than anything

We in the crowd swooned I think. We all knew that feeling. It was why we were there.

Hensher said when you teach [writing] class, there are always a couple of people whose love of books shines out, they love books more than anything. There’ll always be people like that. (He told us he’d visited Hares & Hyenas, an LGQTBI bookshop here in Melbourne, in Fitzroy. It’s a shop I know; I’ve ordered books from there for work.)

When Hensher was describing how he wanted to capture some of the political argumentativeness of the activist times (’70s and ’80s) it made me think of Monty Python’s Life of Brian, with all the acronymed splinter groups. Hensher said the GLF (Gay Liberation Front) was left wing and a bit more right was the CAG (didn’t catch the name of it). Hensher talked about the very ‘camp’ people who were active in those times who had spines of steel, and were really heroic to him.

Michael Cathcart then asked about the next lot of ‘targets’ in the book (as if gay people had been skewered; like I said I haven’t read it, but it doesn’t sound to me like anything other than a sympathetic treatment).

Sounds like there’s another chapter, which looks at the Bauhaus. [This is where I got lost but it didn’t bother me. I thought: I’ll just read the book.]

So now I’ve gone and gotten the book: there are 6 ‘books’ in this big red hardcover tome:

Jesus, that’s just made me even more keen to read it. But I need space, and time. I want this to be a read-through and I have other things I have to ‘get done’ before I can settle to something that seems so delicious.

Another note I have here: ‘Deakin Edge half empty. Embarrassing. Other venues have been packed, the Optic Bar being used for Big Issue launch (why? so noisy?) also for the Morning Read. Noisy.’

Back to Hensher. He said the novel is really about how ideas can spread in an interesting way, where do we get our ideas from? They don’t arrive fully formed in our heads necessarily.  The use of the piece of music, The Emperor Waltz, as a motif through the book represents the things we know without knowing we know them. This piece of music is

a perfect example of music everyone’s heard, but no one can say when they first heard it, it’s just drifted into your mind… the same way ideas are

He talked about the artist Paul Klee:

What is it about Klee, not just in what he made, but what he said. It’s in his face – pictures of him in WW1 – people who don’t know him, people’s eyes will go to his face in a group… there was something extraordinarily magnetic about Klee, even on first encounter.

Apparently there’s a section in the novel based on Hensher being hospitalised with a toe infection, and spending a week in a 4-bed ward. For a novelist, trapped in such a place, with the nurses, all the people, their visitors, said Hensher:

Hensher talked about the framing in Dickens’s Little Dorritt (I haven’t read it) and when he came to thinking about the setting and narrative for his book, decided not to use a similar linking device as Dickens used. He just has sections  ‘bang up’ against each other. His agent said ‘oh foreign-language readers aren’t going to like it’ but the sections needed each other, they didn’t work separately he said.

A lot of characters enacting all sorts of public dramas, discussing who loves who, living in a world where people have houses and mortgages – that’s my idea of a really good novel

He started writing out of a moment of agonising boredom. He was on holidays for a month in Sicily with his partner and his mother. She didn’t speak English and Hensher didn’t speak Italian, and his partner was going off on business; it was really hot and nothing to do other than begin a novel. He wrote for three weeks and someone published it: ‘I don’t know why, I really don’t know why.’

Funny finish. One of the audience questions was about the red cover of the book and the blackbird on it. When he saw the cover designs he asked about the black bird. The designer sat him down and took him through the book, showing him the twenty appearance of blackbirds in the novel. ‘I hadn’t noticed it was all the way through,’ he said. ‘Including a blackbird being eaten.’