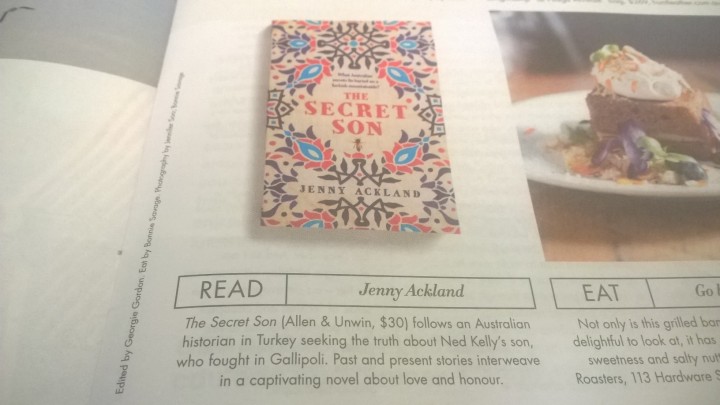 This is what I saw in The Age Sunday Life magazine this morning. Nice!

This is what I cooked last night. I don’t think anyone can make a better spaghetti marinara than me. Romeo’s in Toorak? I think not. TIAMO in Carlton? Pffft.

Yesterday I spent a lot of the day reading Charlotte Wood’s new novel THE NATURAL WAY OF THINGS. It’s a grim read, but not too confronting (I didn’t think) and entirely convincing. It felt like an important read as well, and while I did read ANIMAL PEOPLE a few years ago, I liked this one more.

Ah, Franzen. Where do I start? Perhaps I’d better do this in order, as I continue my numbered reading list for the year.

Last one I talked about was number 35: Quicksand, by Steve Toltz.

36: The Member of the Wedding by Carson McCullers. I’d had this for a little while. I think I’d read Kirsty Gunn (when talking about form, and talking about voice) say that she thought this slim novel was a fine example of a child’s point of view narrative. It is. It is wonderful. I loved it.

37: The Talented Mr Ripley, Patricia Highsmith. I’d seen the movie, of course. Hasn’t everyone? Gwyneth, Matt and Jude. But I don’t think I really knew it was a novel until a recent Book Show on the ABC where they were talking about another of Highsmith’s novels, This Sweet Sickness. I bought both, and then realised that Ripley is a series, there’s a couple more of them, so that’s exciting too. The book: It’s amazing. That is all.

[My diary shows a few weeks now where I didn’t finish anything. It didn’t mean I wasn’t reading – I was. I always am. But not finishing anything. I was picking up and starting books, and not finishing them.] 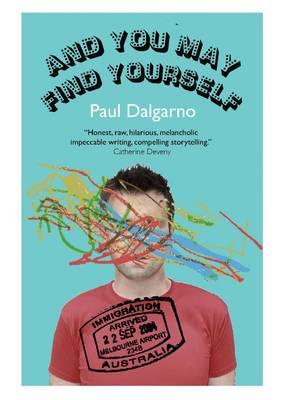 38: The next book I read very quickly and had no trouble finishing was local author and newest Australian that I know, Paul Dalgarno’s And You May Find Yourself. I found this a sad, but funny, but sad, but funny, moving, candid, sad, but funny, read. This guy can write, and what a privilege it was to be invited in to his private private moments as he tells the story of moving to Australia from Scotland, with a small child and another not just ‘on the way’ but ‘gonna get here really really soon!’ to no job and no house. The memoir tells of the family arriving, but also covers Paul meeting his wife Jess, and there is movement back and forwards in time, drawing the reader to the point of ‘now.’

One thing I found really interesting with the way Paul wrote this book was his use of repeating motifs or character tags to create a deeper understanding of, and sympathy for, the characters. One example was his father-in-law, who’d suffered a stroke, and we are told he ‘knew it but couldn’t say it’and it became a refrain that would come like a surprise, and remind you, and it was beautifully compassionate and gentle. I don’t remember a technique like that and it was exciting and original.

It’s a sad book at time, very moving, especially with the talk of Paul’s fathers’ hands, that sometimes they would do ‘good things’ but the reader is never allowed to forget the same hands would hit the young boy. We are not allowed to forget or put away this violence, just as Paul will never forget it.

I didn’t love this book and my treatment of it is knee-jerk and simplistic. For anyone wanting a more sophisticated reaction, I suggest this article from the LA Review of Books: Mr Difficult Reject His Title; Ira Wells on ‘Purity’ which is a good read but still didn’t manage to retrospectively lift the book for me (though it did help to clarify why the sections. THEY’RE NOVELLAS!

39. Purity, by Jonathan Franzen. I should say first that I read and enjoyed Freedom, and then read and enjoyed (more) The Corrections. Both were holiday reads. Freedom in Turkey in 2010 and The Corrections in Bali in maybe 2011, or 2012. Can’t remember. But my point is that they were read while on holiday and maybe I enjoyed them the same way I was enjoying swimming in pools every day, drinking too much Kavaklidere and/or Bintang, not having to cook, and not having to work. But Purity. Well. I liked the opening:

On page 15: ‘Sex was a tasty fish with so many small bones.’ I think this is genius to be honest. Because IT IS. And then the way I was drawn into the narrative, in the point of view of Purity or Pip Tyler. She’s a young woman in what seems to be a share house and she fancies someone else living there, you think he’s single, but then it turns out he has a wife, and then there is reference to Germans, and for some reason you think they are imaginary, but no, there they are. This was all rather delightful and everything is fine and dandy until page 73 when that section ends.

The next section is called The Republic of Bad Taste, and this is where I started to get a bad taste myself. We leave Pip and enter the point of view of Andreas Wolf, the Assange-like character. Apart from a fun Nabokov-inspired acrostic-filled poem on pages 124 and 125 this section was pretty dead for me. This Andreas section was filled with stiffy references as well, and it seemed at times the only thing we were to take from this section was his predilection for under age girls and his erections. YAWN. The Berlin sections were marginally interesting but not enough.

Next bit: Too Much Information. Sixty-seven pages from yet another character Leila, who may have been mentioned before now, or may not. I can’t remeber. It was too hard keeping track because I never fell into the story.

Next bit: Moonglow Dairy. Pip again. For seventy-two pages. She’s now in the place where Andreas Wolf is. And they get it on and it’s so unbelievable and stupid. I think there might have been more stiffies here, but definitely, there is this on page 298:

She had to fight the temptation to sext him a picture of her private thing.

She had to fight the temptation to sext him a picture of her private thing.

Next section: le1o9n8a0rd. Yes, really. But while you are flipping out over the cleverness of that ‘word’ let me say this section, which runs for 125 pages, IS IN THE FIRST PERSON from the point of view of a man called Tom, who used to know Andreas Wolf and had an affair or was married to Pip’s mother and who runs a magazine and is now living with Leila. But why the first person? It was sooooo unsettling.

Final section: The Rain Comes. Back to Purity/Pip and again, a good section like the opening one, this goes for forty-five pages, and it’s like the whole thing has turned full circle, and we are back at the beginning. Deliberate I reckon.

I could have done with the whole thing told from Purity’s pov I think. But overall, I just don’t know what he was trying to do with this one. It’s SO heavy-handed. The repetitive imagery of clean/dirty is so obvious. The writing is overwrought at times, and the stuff between Pip and Andreas and Tom is so unbelievable and cringeworthy. The relationship between Wolf and Pip is so unconvincing, and the dialogue:

I’m sorry.
No, I’m the one who’s sorry. I ruined everything.
Don’t blame yourself. I’m a grown man. I can take care of myself.
I’m never going to betray you, she blubbered. You can trust me.
I won’t pretend that I don’t love you. I do love you.
I’m sorry, she blubbered.
But here, enough of that. He took off his slicker, draped it over her, and sat down. Let’s think about what you want to do now.
She wiped her nose with her hand. Just send me home, she said. I had one big opportunity here, and I blew it.

(page 291; I’ve been lazy and haven’t done the quotation marks. I didn’t even want to transcribe it, tried taking a photo of it to insert, but my phone keeps re-orienting it sideways.)

It doesn’t matter that it’s out of context. The dialogue stinks at times.

I’m leaving my 40TH book to another post because it was Charlotte Wood’s THE NATURAL WAY OF THINGS and to have it here, below the above, would be a travesty.