Book 44 for the year is A Strangeness in My Mind. 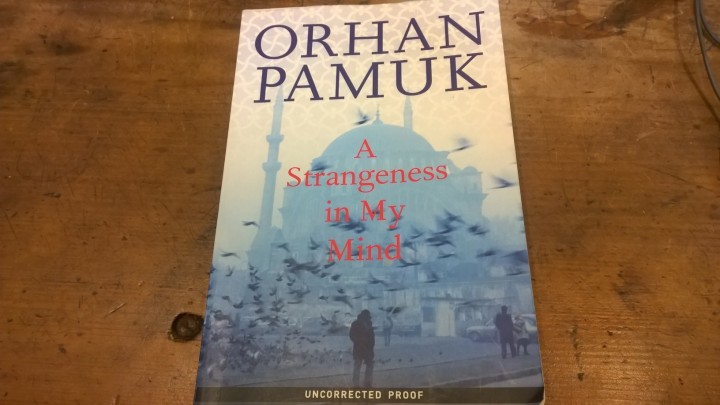 I love Orhan Pamuk’s novels but I haven’t read them all because not all are, well, accessible. The ones I’ve tried and not finished: My Name is Red and The Black Book. The ones I have, and have loved them all: Snow, The Museum of Innocence, Silent House and now A Strangeness in My Mind.

This new novel, not out here until this month maybe, or next, is about Istanbul and the changes in that grand dame of a city over fifty years, from the 1960s to the 2010s, and about an extended family who migrates from their rural village to the outskirts of Istanbul. Kind of a departure for Pamuk in that usually his protagonists reflect his own wealthy upbringing. This novel is concerned with the street sellers of Istanbul; boys and men who moved from their regional areas and rural villages into the big cities as economic migrants in search of a better livelihood. The novel also explores the phenomenon of ‘gecekondular’ (residences ‘built-in-a-night which can’t be pulled down easily by officials if they are erected within twenty-four hours, have a roof and so on) and the transition in construction and development from such shanty-towns to multi-storey residential apartments that began to replace the gecekondus in the ’90s and 2000s. Other transitions in the book are those of industry. Main character Mevlut Karataş* is a decent young man who travels to Istanbul with his yoghurt-selling father, and they set up business, trawling the streets, peddling yoghurt during the day, and boza (a low-alcohol beverage) at night. Mevult’s cousins have also moved to the city, with their father, and so Pamuk establishes rivalries and partnerships, and the reader is happily immersed (this one, anyway) in the daily travails of Mevlut; his efforts to make a living, his falling in love with a beautiful girl at his cousin’s wedding; his elopement with the girl after writing love letters to her for three years. It’s not a spoiler to say that the girl he elopes with is not the one he thought he was writing letters to; instead it’s her older and less-attractive sister (the hint of this is on page 7 and it’s confirmed on page 9, and revealed in the blurb on the back of the book.) It’s the measure of Mevlut what he does once he realises this ‘mistake’ and it takes the rest of the book for both Mevlut and the reader to find out exactly what happened.

In addition to a changing city-scape, the novel explores industry and work in a way I’ve never seen before in fiction (I haven’t yet read David Foster Wallace’s The Pale King, by all accounts exhilarating and stupefyingly boring.) We see Mevlut move from yoghurt and boza to working in a cafe to pushing a chicken-chickpea-rice trolley around the streets during the day, and boza still at night. Then he tries ice cream, they open a neighbourhood shop and sell boza, he works as a car valet and as an electricity meter reader. There are themes of differences between Alevi and Shiite muslims; the privatisation of electricity and the place of religion and politics in society. Tansu Çiller is name-checked; she was the Prime Minister when I was there in the mid-90s. First female President she was described to me in this way by my ex: ‘They thought she could be a puppet and she let them think that, but when she got into power, she did everything her way and no one could tell her what to do.’ When he said this, there was admiration in his voice.

How Pamuk chose to structure this novel is fascinating. The form is as if Pamuk himself is speaking directly to the reader. He addresses the reader in the early pages to set up the narrative, and it’s a very nineteenth century device, which I don’t mind but others may find anachronistic and unsophisticated. The text is sectioned into parts which are from Mevlut’s point of view (close third person) and then other parts where an array of characters appear and speak in the first person. Each of these snippets – and sometimes they are just snippets, of a paragraph or two long – are interspersed throughout, sometimes to great comedic effect, and sometimes very movingly too, showing different perspectives on the unravelling story. The back of the book has an image, a black and white photograph of a street seller, possibly of chestnuts. He is facing a group of three men who sit on steps, in front of barred-windows, graffiti (two hearts with arrows through them), the obligatory street cats, one scarf women walking home with her shopping and at the edge, another street seller, possibly, sitting on a stool with his back to camera. I wouldn’t be surprised if Pamuk had written the whole of his novel with this image as the seed element. Brilliant.

Also in the back is an index – an index – of characters, as well as a time line. Here are the first few index entries (and the bolded entries refer to first person narratives):

Not all the characters get a first person voice, but there are eleven first person appearances, and then Mevlut’s third person narrative. It takes a bit of getting used to but after a while it was like I was sitting in a room, being told a story, by a whole bunch of people, with interruptions and people wanting their say.

For me there were many resonances in reading this book, reminders of my times spent living in Istanbul. The street sellers, especially the chicken-chickpea-and rice, one of my favourites. Midye dolma (stuffed mussels) are mentioned, and that the sellers of those came from Mardin (from memory, can’t find the reference) and they were my other favourite street food. The car valets: when I learned Turkish in Taksim, it was a four-month course or something, and I went three or four days a week. The first class, my husband drove me there (in our white Tofaş) and in the street near the school got out and gave the keys to a boy standing near by.

‘Just you drive here tomorrow,’ he said. ‘Look for him – he will see you – and give him they keys. He’ll park the car.’ And so it was. I never saw money change hands, but that boy was always there to take the keys, and always there when I came out to give them back to me, and point out where the car was.

Then there was the electricity. I swear in every apartment we lived in in Istanbul, and there were four or five) the electricity (and telephone and cable tv) was always dodgy. You could see wires running up and down the stairwells, and so it was fascinating to read how businesses, residences, everyone, it seemed, was scamming free electricity in Istanbul. It was like the wild west.

So, to things in this book that made me pause and laugh incredulously and started a strangeness in my own mind. Things that I noticed: passive main protagonist; dogs; a mention of sparrows; a feminist lament; a crooked-necked character and then, towards the end, people in a taxi waving away other people trying to hail said taxi.

Orhan Pamuk’s characters are travelling in a taxi but driven by Mr Sadullah, the owner/operator:

Her husband and Mr Sadullah took me, Mevlut, and Fevziye with Ibrahim on her lap on a drive along the Bosphorus. On our way back, people thought we were a taxi cruising for fares and kept hailing us from the pavement or trying to jump in our path. Every single time, Mevlut would cheerfully shout from the front: “Can’t you see the taxi’s full?”

My characters are driving in an old taxi that is not operational but people are trying to flag them:

Cem went into the shop and came back with two bottles of liquor in a plastic bag. As he reached for the door handle, a man opened the back door.
‘It’s not a taxi,’ Cem said and waved the man away.
They drove a little further up the street. At a red light, two women wearing scarves tried to get into the back and Cem said again that it wasn’t a taxi, speaking to them through the open window.
‘But it’s got a sign,’ one of the women said, gesturing at the roof.
They went through the streets with people trying to flag them down, Harry saying that he thought that turning the taxi light on meant they were unavailable, and Cem saying he believed it was the opposite.

It’s a long book, 582 pages, and there are a lot of words spent on descriptions of jobs, of suburbs and buildings. A few weddings (someone always seems to fall in love, or things happen, at the weddings) but at the end, we are drawn full circle in a very satisfying way. We get our answers, we get at Mevlut’s inner world, and we find out what he’s been looking for. He has transitioned from a man who won’t cause a fuss, will marry the wrong woman and make the best of it, to a man who will assert his rights and then some. It’s believable, that this quiet man after forty years will find his voice, still a quiet voice, and determinedly say: No. And it’s moving as well. Towards the end Mevlut says:

I will sell boza until the day the world ends

I’m not sure why that is so touching to me, but it speaks of a man who knows himself, what he wants, and is happy.

Now he knew what it was that he wanted to tell Istanbul and write on its walls. It was both his public and his private view; it was what his heart intended as much as what his words had always meant to say. He said it to himself:

I have loved Rayiha more than anything in this world.

Great final lines, great book about marriage, intimacy, family relationships, the development of cities and people, whether we work to live or live to work, and how the passing of time affects us all.

I also recommend Silent House and The Museum of Innocence.

[Book 43 was Mireille Juchau’s The World Without Us. Great writer, I really enjoyed it. Have dipped into Lucy Treloar’s Salt Creek, what a magnificent opening chapter, but next on the endlessly moving conveyor belt of books is A Little Life by Hanya Yanagihara. Can’t wait.]

*Karataş Beach is near Adana, a place I spent a lot of time in 1990 when I first met my ex husband. It’s the place I learned to play Okey, developed a real taste for Efes Pilsen, was told how to make a breakfast salad, and that camp sites and beach-side areas often have mosquito trucks pounding around, pumping out a thick toxic smoke to kill insects and possibly mutate DNA. A place where I think I was the only person to take paper into the toilets, where often there would be oranges floating in the sea, and where women would swim in their clothes, so I did too. I made lots of mistakes – cultural and personal – but it was a wonderful time. Interesting and fun.